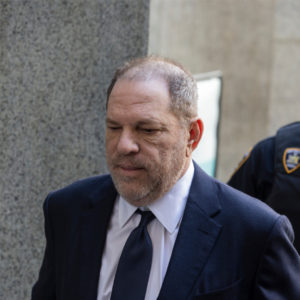 This article is by Barry Goldstein and was published by stopabusecampaign.org

In a rare victory in the work to prevent sexual assault, Hollywood behemoth, Harvey Weinstein was convicted of rape and sexual assault. Many of his victims and their supporters were afraid he would again avoid accountability and concerned what an acquittal would mean for the #MeToo movement. For decades, the idea Weinstein would be convicted and jailed seemed like it would take a miracle. Most rapists get away with their crimes and more so when the miscreant is rich and powerful.

Weinstein was one of the most powerful men in Hollywood easily able to destroy the careers of actresses and others working in the industry. He used this power and access to engage women in pressured or forced sexual behavior and then to keep them silent.

A major investigation by New York Times reporters Megan Twohey and Jodi Kantor exposed his crimes and brought pressure on prosecutors to bring charges. Courageous victims agreed to speak with the reporters and testify at the trial. This was the type of case prosecutors are usually reluctant to pursue. There was no physical evidence; long delays before reports and in many cases the victims felt compelled to maintain a relationship with their assailant that usually is sufficient to cause reasonable doubt. In reality, these obstacles are common in many sexual assaults which is why our record in responding to rape is such a disaster.

Many people are hoping that this unlikely conviction will lead to a transformation in the prosecution of sexual crimes. In recent times we have seen far more coverage of issues around sexual assault and a wide variety of scandals that were hidden for years or decades. We don’t know yet whether this case will inspire a change in society’s response to sexual assault, but I want to explore what such a turning point would be like.

What Would it Look Like for Society to Start Taking Sexual Assault Seriously?

Implementing practices that offer less tolerance for sexual assault, harassment, and rape would reduce the frequency of these life-changing offenses in many ways. Weinstein had hundreds of victims, and it is typical for rapists to abuse many women. Jailing Weinstein after his first assault would have denied him access to harm other women, and the punishment would have discouraged his behavior. More generally, punishment and accountability would stop potential sexual offenders from committing their crimes.

Police and prosecutors would take sexual crimes more seriously. Investigating sex crimes more aggressively, and improved treatment of victims would increase the frequency of reports. We would stop reading about sexist judges giving lenient sentences out of concern about the adverse effects on rapists’ lives. All of this would result in more convictions and punishment and so reduce the incidence of sexual assault.

The popular myth, or more appropriately described as a lie that women frequently make false reports of rape and abuse, is a significant factor in encouraging rape and sexual assault. In reality, false statements are rare. The lie discourages reports of sexual assault because victims expect extreme skepticism and mistreatment if they make reports. Jurors may treat the lie as providing reasonable doubt, and this further discourages prosecutors from putting rapists in jail where they belong.

Belief in the lie impacts public feelings about sexual assault, and the way the media portray rape, including in news programs. Rapists seek to encourage faith in the lie, and this makes potential offenders more likely to commit their crimes. The lie would be exposed and abandoned in a society that no longer tolerated sexual abuse.

It is standard for defense attorneys in rape cases to aggressively and unfairly attack victims, a part of the strategy in the Weinstein case. These tactics discourage women and prosecutors from bringing charges. The attorneys use the tactics because they work to sow doubt about the victims’ reports. It is common for victims’ stories to have minor discrepancies, include delays in reporting the crime and include behavior that non-rape victims may not understand. Defense attorneys take advantage of these non-probative factors to promote confusion. Prosecutors can use expert witnesses to explain these behaviors as usual. When society stops tolerating sexual assault, jurors will be offended by these despicable tactics, and defense attorneys will stop when this creates a backlash against a defendant for allowing or encouraging more abuse of his victims.

Good results will occur when a society values women and girls for their intelligence, talent, hard work, courage, caring, and contributions, as opposed to the focus on a women’s beauty, body parts, and sexual attractiveness. This is the message Weinstein believed and acted upon. Although he was not involved in child sexual abuse, the same common objectification encourages the abuse of women and children.

In a society that stops tolerating sexual abuse, people will be deeply offended by improper sexual behavior. Innocent until proven guilty is a fundamental belief of our judicial system and our democracy. Sometimes there is inadequate evidence to convict an offender. These principles are essential, so no one should be jailed without proof beyond a reasonable doubt. But this standard only applies to the criminal justice system. It is appropriate and encouraged to shun offenders who found a way to avoid criminal consequences for their actions. The shunning will send a message to the offenders and other potential violators that sexual assault has no place in our society.

Rewards for Society that Refuses to Tolerate Sexual Assault

Victims of sexual abuse suffer enormous and very personal harm, and the cost to society is staggering. The United States spends over one trillion dollars annually to tolerate domestic violence, and the cost of sexual assault is probably much higher. Much of the savings would be in health care and crime. This benefit would reduce taxes and health insurance premiums, which would increase wages and allow needed investments and services.

The cruel fact is that victims of sexual assaults often fail to reach their full potential because of the trauma. Some may die early from suicide or a drug overdose. Many of Weinstein’s victims saw their careers undermined or destroyed. We will never know all that we lost, which is why one of the saddest phrases is “what might have been.” The loss from the ongoing tolerance for sexual abuse is a constant brake on our economy. Ending our tolerance for sexual abuse will mean substantially increased life expectancy and a much-improved quality of life.

The victims of Harvey Weinstein and other predators often suffer in silence. Changing our practices to take sexual assault seriously will encourage women to speak about these traumatic events and make it safer to do so. Partners will be encouraged to provide the love, support, and patience that is needed.

There is no good reason to continue failed practices and values that have subjected women to so much abuse for so long. The responses would be very different if men and women were equally valued and shared in the power, privilege, and responsibility in our society. Women deserve far more than not to be sexually or otherwise abused, but that would be a good start.