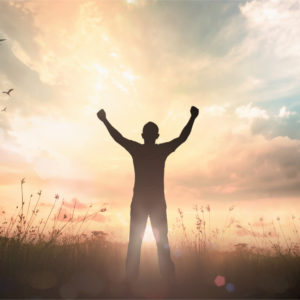 Intro by Rev. Joseph Paluszak of Victim to Victor Ministries: As I was praying about the coronavirus God reminded me of the below article that Kenneth W. Hagin, Jr. shared in their publication Word of Faith over 15 years ago, I managed to locate it on the internet. I felt that the Spirit of God was telling me that this works for any trial or affliction (i.e. sickness, emotional brokenness, financial needs and/or devastation, etc.) inflicted on man by the powers of darkness. But first let me lay a  scriptural foundation for the following testimony.

And at midnight Paul and Silas prayed, and sang praises unto God: and the prisoners heard them. And suddenly there was a great earthquake, so that the foundations of the prison were shaken: and immediately all the doors were opened, and every one’s bands were loosed.

Note, they didn’t just pray, but they sang praises to God as well, and they were singing so loud the other heard them!

Be anxious for nothing, but in everything by prayer and supplication, with thanksgiving, let your requests be made known to God; and the peace of God, which surpasses all understanding, will guard your hearts and minds through Christ Jesus.

In Matthew 7:24-27 Jesus gave the definition of a fool and a wise man. “Therefore, whoever hears these sayings of Mine, and does them, I will liken him to a wise man who built his house on the rock: and the rain descended, the floods came, and the winds blew and beat on that house; and it did not fall, for it was founded on the rock.

“But everyone who hears these sayings of Mine, and does not do them, will be like a foolish man who built his house on the sand: 27 and the rain descended, the floods came, and the winds blew and beat on that house; and it fell. And great was its fall.” Let us not be foolish, but wise.

Down through the ages, people have been in search of miraculous cure-alls for their sicknesses and diseases and their aches and pains. People throughout the world today are searching for help and relief from pain and suffering, and many have paid thousands of dollars to find a cure for their ailments. But the Bible tells us about a cure that doesn’t cost anything! Someone else paid the price for this cure!

Actually, this cure was the most expensive cure of all to pay for; it cost Jesus Christ, the Son of God, His life. Jesus’ death and resurrection provided a cure for you that doesn’t cost you anything! And if you will administer this cure faithfully, it will work every time. The name of this cure is the praise cure!

In her book, “Healing From Heaven,” Dr. Lilian B. Yeomans tells the story about a woman who went to China as a missionary many years ago when China was open to receiving the gospel. This missionary contracted smallpox.

In those days no cure existed for this disease, so doctors could do little for her. If a person contracted smallpox back then, there was no hope-the person just died. It was a deadly disease. This missionary was quarantined in her room, and ugly smallpox marks covered her body from the top of her head to the soles of her feet.

There she was, stricken with a deadly disease with little medical assistance, destitute, and in a faraway country virtually given up to die. She didn’t know what to do since there was no cure, so she began to fervently seek the Lord.

The Lord always rewards the diligent seeker, and He always answers sincere, faith-filled prayer, so He spoke to her and told her to praise Him for His faithfulness to keep His own Word. Then He showed her a vision of two baskets. One basket contained the test and trial, the smallpox. That basket was full.

As this missionary lay quarantined in her room, she began to fervently praise and worship the Lord day and night. Everyone feared for her life and thought the loud praises coming from her room was little more than the act of a delirious woman. But in spite of all opposition, she continued to praise God.

What was the result of such sincere and devoted praise to God? Finally, after several days of heartfelt praise, the Lord showed her that the praise basket was full! She walked out of that quarantined room completely healed! Her skin was as smooth and clear as a child’s; no smallpox marks were to be found anywhere on her body.