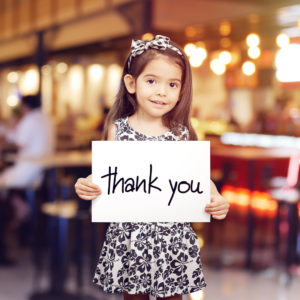 I Thessalonians 5:16-18 reveals what the will of God is for every believer. “ Rejoice always, pray without ceasing, in everything give thanks; for this is the will of God in Christ Jesus for you.

In today’s blog I want to specifically address Thanksgiving. Please note God does not command us to give thanks for everything, that would imply that He authors the sickness, disease, poverty and adversity that attacks all of humanity. Rather we are told to give thanks in everything, in the midst of all the attacks of the powers of darkness against everyone on this earth, confident that God will always lead us into triumph in Christ Jesus.

Thanksgiving is to express thanks and gratitude to God for the things that He has done for you and provided you.

Romans 1:21 warns of the consequences when people know God, but do not glorify Him as God, nor are they thankful. They become futile in their thoughts, and their foolish hearts are darkened. Their thanklessness creates a spiritual vacuum that darkness invades, which in turn initiates a threefold consequence.

They lost perspective of God, which always results in idolatry!

They lost perspective of the purpose of God’s creation,

III.   Verses 26&27: For this reason, God gave them up to vile passions. For even their women exchanged the natural use for what is against nature. Likewise, also the men, leaving the natural use of the woman, burned in their lust for one another, men with men committing what is shameful, and receiving in themselves the penalty of their error which was due.

They lost perspective of their own identity,

which resulted in perversion.

28 And even as they did not like to retain God in their knowledge, God gave them over to a debased (reprobate) mind, to do those things which are not fitting; 29 being filled with all unrighteousness, sexual immorality, wickedness, covetousness, maliciousness; full of envy, murder, strife, deceit, evil-mindedness; they are whisperers, 30 backbiters, haters of God, violent, proud, boasters, inventors of evil things, disobedient to parents, 31 undiscerning, untrustworthy, unloving, unforgiving, unmerciful; 32 who, knowing the righteous judgment of God, that those who practice such things are deserving of death, not only do the same but also approve of those who practice them.

Never wanting to end on a negative note, I want to share an insight from Pastor Tim Lamberts sermon this morning on Thanksgiving Releases Kingdom Power.

In Luke 17:11-19 we see that ten (10) lepers beseeched Jesus, “. . . have mercy upon us,” and Jesus cleansed them. They were cleansed from leprosy, but the ravages of the disease still marred their bodies. Fingers had been eaten away in whole or in part, as was their ears & noses, in short, leprosy has left them permanently disfigured.

Nine (9) went their way rejoicing, but one (1) returned to Jesus fell down at His feet and gave thanks. Jesus said to him, “Arise, go your way. Your faith has made you whole.” All ten (10) were cleansed from this horrific leprosy, but the one (1) who gave thanks was made whole and restored from the ravages of the disease!

And the Spirit of God would speak to each and every one of us and say, “Go, and do likewise to the Glory of God and the shame of the devil!”

I close with a proverb that I break out every year during the Thanksgiving Season: Thanksgiving is something I used to do once a year when I ate turkey, now it’s something I do continuously to keep from being a turkey!