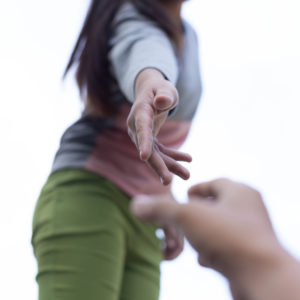 This article is by Becca Stevens and published by Guideposts

I’m the founder and president of Thistle Farms, a nonprofit organization headquartered in Nashville that helps women heal from sex trafficking and drug and alcohol addiction. Thistle Farms owns five houses in Nashville where women seeking freedom from the sex trade, prison and addiction live rent-free for up to two years with access to free medical care, counseling, education and job training. More than two thirds of residents have remained clean and sober for at least two and a half years after moving in. We have helped open more than 30 similar homes around the country.

Thistle Farms also operates several social justice enterprises that make and sell clothes and all-natural home and body-care products, run a cafe, operate a retail store and manage more than 25 global partners in a shared trade network since our inception 17 years ago. The businesses brought in more than three million dollars last year, and more than 65 percent of the staff are women who have escaped the sex trade and other forms of abuse and punishment.

One of our newest employees said that this was the first time in her life she sat down for dinner with a group of people who talked about their day. For her, going to work, coming home to dinner and getting up in the morning to a daily meditation were brand-new experiences.

I’ve been an ordained priest in the Episcopal Church for 27 years. But I didn’t start the residential community of Thistle Farms for a church. For a long time, I didn’t even know why I felt so compelled to reach out to help struggling women.

I’ve come to learn that healing is never a one-way street. I started Thistle Farms because I needed to. The women who live in the homes and work together consider this organization a refuge. I’ve come to see it’s mine too.

No one knows how many women and children are involved in sex trafficking in the United States. Many sex crimes go unreported. Women and teens are lured into prostitution by pimps and gangs. Most have experienced childhood trauma and abuse, grown up in the violence and vulnerability of poverty and dysfunction and known the injustices inherent in many of our systems. They’re threatened if they try to run away. Many become addicted to drugs and alcohol. They feel shame, get prison records and find themselves trapped, unable to rejoin society.

On the surface, my life has been totally different from the lives of the women I serve. I’ve never lived on the streets. I’ve never sold my body. I’ve never been addicted to drugs or alcohol. I grew up the daughter of an Episcopal priest, went to college, met my husband at divinity school and am raising three happy, healthy children.

My dad worked at a church in New Haven, Connecticut, home to Yale University. My mom stayed home to raise my four siblings and me. When I was five, Dad answered a call to establish a new mission church in Nashville. Though Mom was ambivalent about the move—she’d never lived so far from upstate New York, where she’d been raised—she and Dad took their faith seriously and she never considered standing in the way of the church.

This was in 1968, the year Martin Luther King, Jr., was assassinated in Memphis, a couple hundred miles from Dad’s new church. My parents felt a sense of urgency about their ministry.

Dad never got to bring that ministry to fruition. Less than a year after we arrived in Nashville, Dad was driving home from a parishioner’s house when he was struck and killed by a drunk driver. Mom got the news from another parishioner, who’d seen the accident.

Life turned upside down. The church sold us the rectory, so we wouldn’t have to move. But Mom suddenly had to support five children without her husband’s income. She collected Dad’s Social Security, did childcare for neighborhood kids and eventually got a job at a local social service center, where she later became director.

Our house filled with people. Parishioners. Church officials. Strange kids. Mom did her best not to break down in front of my siblings and me. But she was changed by Dad’s death. We all were. I didn’t understand at first that death meant forever. At last it began to sink in that I no longer had a father. It was for that very reason—my distress and loss of parental supervision—that I was targeted by an older man at the church who’d been friendly with my dad.

He spent lots of time with my family, offering to help. The first time he sexually abused me was in the church fellowship hall during a spaghetti dinner. He was strong and held me down. The abuse lasted for more than two years. I told no one. I was scared and confused, afraid of what might happen if anyone found out. The last time he abused me, I fixed him with a hard stare, and I think that startled him. He never touched me again.

I tried to pretend it never happened. Sometimes I wondered if I’d imagined it. I grew up, went to college and started work at a Christian international aid agency in Washington, D.C. I never warmed to Dad’s Nashville church—part of me blamed it for his death—but I never lost my faith. I wanted to be like my parents, whose faith was oriented toward serving the poor.

It was in D.C. that I first volunteered at a women’s shelter. It needed people to stay the night, and I signed up for a shift. The women’s situations—battered, abused, addicted, selling their bodies—shocked me but filled me with a powerful conviction. I wanted to help these women the way Mom and Dad had helped people—with God’s love.

Without even knowing what would come of it, I applied to divinity school in Nashville. There I met Marcus, an aspiring musician taking divinity classes on the side. On our first date, I asked him to help me move furniture at a women’s transitional home where I worked. He never complained, and we married a year later.

I was ordained and got a job as a university chaplain because it gave me time to do the work I really wanted to do—minister to women in distress.

I still had no idea why I felt compelled to do such work. Then, not long after our second child was born, I started breaking down. I was spending a lot of time at the transitional home and, at the same time, trying to put together a home of my own, one that would give struggling women not only shelter but many of the other things they lacked—love, health, friends, mentors, job training, self-sufficiency and dignity.

Our first child was four years old, close to the age I was when Dad died and my abuse began. I became unbearably anxious. I broke out in hives daily. I misplaced keys, even sermons.

With Marcus’s support, I went to see a therapist. To my own shock, the story of my abuse was one of the first things that poured out. About a year earlier, I’d run into the abuser at a wedding ceremony. He tried to hug me as if nothing had happened.

Through conversations with my therapist, I decided to confront my abuser.

I picked out a day and prepared myself. Marcus and I prayed. It wasn’t my goal to go through the court system. I just wanted the abuser to be held accountable by the communities he worked in. I wrote down a list of therapists and other resources he could turn to for help. He still attended the church my dad had started. Mom still had his number. I called and told his wife I wanted to visit because I had something to tell them. She sounded startled to hear from me. Marcus offered to come, but I told him I needed to do this on my own. What I didn’t know was what I’d do if the abuser denied it.

When I arrived, he and his wife answered the door and invited me in. We sat for a moment in awkward silence.

“I have a story to tell you,” I said. “Your husband abused me when I was a child.” I gave his wife details. In the middle of them, she went to the bathroom to be sick. He rubbed his thigh nervously.

“Who else have you told?” he asked when his wife left the room.

His wife came back in, and he admitted his guilt. “I’ve wanted to talk to you about it for a long time, but I didn’t know how.” His wife looked as if she might be sick again.

I handed them the prepared list of resources and said I would pray for them.

“Please don’t talk to me again,” I said. “I need you to leave me alone so I can live the rest of my life.”

The minute I stepped outside, I felt free. Freer than I’d felt for decades. Yes, I had been sexually abused. But it was not my fault, and it did not define me. In a way, my wound was a gift. Now I knew exactly why I felt compelled to reach out to women who had been abused. I could offer them the most valuable thing I had—myself, a child of God broken and redeemed.

I have so many stories to tell about the women I have met through Thistle Farms. Stories of pain, suffering, healing and triumph. Those stories have made all of us stronger. Together, we’ve built an enterprise so large, we hired a CEO three years ago to run it.

I hope you will visit the Thistle Farms website and get to know some of those stories and try the healing products. Most of all, I hope you will see a bit of your own story in the lives of people who suffer and seek healing. In God, all of our stories are part of one big story. A story about redemption so powerful that no force—not even sexual abuse—can withstand it.