The Beautiful Struggle to Forgive 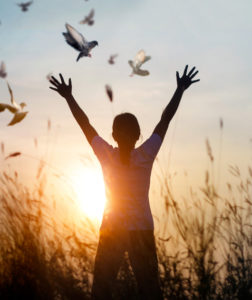 Emmy Award-winning sports journalist and former ESPN producer Jason Romano remembers the day he got the phone call. How could he forget?

On the other end was his father, who was in tears with terrible news. Patty, his second wife, and Jason’s stepmother had been killed in a house fire. Jason was devastated.

Then he discovered it was all a lie.

His father had been drunk and made up the whole story. For money? For sympathy? Jason never got a straight answer.

And, sadly, that wasn’t an isolated incident. Jason’s father missed all the pillar moments in Jason’s life, including his high school and college graduations and his wedding. He regularly interrupted Jason’s life with drunken requests for money or threats of suicide.

Life with his dad was so difficult that Jason resorted to calling him by his first name. That way, when his father got drunk and did something embarrassing, Jason could say, “That’s just Joe. That’s not my dad.”

Jason loved the sober version of his dad. He was supportive and loving. Jason hated the drunk version.

I resonate with Jason’s story. I had a similarly disappointing relationship with my father. I understand that sense of feeling torn inside because I loved the version who kept his promises and showed his love for me. Not the one that got drunk, that broke his promises, and finally abandoned me.

For Jason, disappointment deteriorated into anger and bitterness. Over time, he came to understand what God’s forgiveness is all about. We don’t deserve it, and we can do nothing to earn it. To receive it, all we have to do is ask.

Think of a person who has hurt you deeply, to the point where you feel unable to forgive them for what they’ve done. Forgiveness is complex. It doesn’t excuse abuse or harmful behavior against you. Forgiveness frees you.

It’s been said that “forgiveness is setting a prisoner free and discovering the prisoner is you.”

Jason Romano is with us on our Focus on the Family Broadcast “The Beautiful Struggle to Forgive” to share four steps that will help you move through your pain toward forgiveness:

By: Focus on the Family

Posted in Blogs and tagged forgive, forgiveness, struggle, The Beautiful Struggle to Forgive