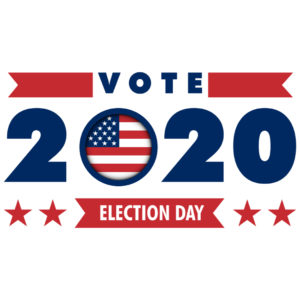 Right now, we are standing face to face with situations in our nation that need to be changed. Some of those situations look totally impossible, but they’re not. Why? Because this country belongs to God.

He’s the One who brought the United States of America into existence. He had a special purpose for it. He needed a country where the gospel could be preached freely and not be suppressed.

In just a few weeks, we’ll be taking our place as Christians at the voting booths for the 2020 election. Most of us know that every election is vital to our nation, our biblical worldview and the fulfillment of God’s plan for America. But this year—2020—seems to hold an even greater significance.

Most people look at this election as Biden vs. Trump. But it isn’t.

Because elected officials vote with their party platform the majority of the time (Democrats 74%, Republicans 89%), this election is about the platforms—what they represent (do they line up with the Bible?) and what they mean for America moving forward. So, your vote will determine America’s course in the years ahead, and it will determine whether or not we continue to enjoy the freedoms and prosperity this country has stood for since its inception.

Here’s what is really at stake in the 2020 election.

In the past, official positions by both the Democratic and Republican Parties on Israel were largely alike. However, just as with every other issue, the divide has widened substantially.

The Republican Party platform is strongly pro-Israel and has only become more so in recent years. While elected officials almost always stand with the party platform, no president has been more pro-Israel than President Donald Trump.

President Trump was the FIRST sitting president of the United States to visit the Western Wall. Even more important was his bold decision to move the U.S. Embassy to Jerusalem—something other presidents promised but never delivered. Finally, his Middle East peace plan, known as The Abraham Accords, has not only afforded him a Nobel Peace Prize nomination, but has positioned America to be BLESSED.

On the flip side, the Democratic Party platform is anti-Israel, in that it sees the only solution to Middle East peace is a two-state solution, where Israeli territory is divided between the nation of Israel and the Palestinians. A two-state solution is not scriptural. The word Palestinian derives from the word Philistine, which explains the continued struggle for the land (see Joshua 13).

Genesis 13:14-17 (NIV) says, “The LORD said to Abram after Lot had parted from him, Look around from where you are, to the north and south, to the east and west. All the land that you see I will give to you and your offspring forever.”

God says He will establish an “everlasting covenant” with Abraham and provides the location of the land He gave to the Israelites in Psalm 89:28-36 and Genesis 15:18-21. It is against God’s will to divide the land of Israel.

It is important to note that as recent as 2016 (Obama-Biden), Democrats passed a resolution condemning Israeli settlement on the West Bank. Democrats and Joe Biden have declared they will push for a two-state solution and have increasingly sided with the Palestinians.

With growing anti-Semitism, especially on college campuses, we must elect those who will stand with Israel in America and honor God’s will for His people. THE BLESSING of this nation will continue under a leader who is pro-Israel. That is one of the most significant issues at stake in the 2020 election, and it is one we must not ignore.

One Word From God Can Change Your Nation! Click HERE to request this timely book by Kenneth and Gloria Copeland for FREE. Offer good Oct. 4 -Nov. 14, 2020.

“You will be hated by everyone because of me, but the one who stands firm to the end will be saved.” –Matthew 10:22 (NIV)

We’ve all seen it. Christian bakery owners, florists and photographers sued and financially ruined for choosing not to participate in same-sex marriage ceremonies. Coaches fired for praying on the field with their teams. Teachers fired, and university students targeted for their faith.

Governments are going toe-to-toe with churches, demanding them to close their doors or stop worshipping in the wake of the recent pandemic, while allowing casinos, abortion clinics and other collective activities to reopen.

Our religious freedoms are under fire. And your right to stand on the side of the Bible will continue to be at stake unless Christians take a stand in the voting booth.

“I knew you before I formed you in your mother’s womb.” –Jeremiah 1:5

Abortion is the taking of an unborn life—a life God created. We must stand against abortion by voting for the party platform that seeks to protect life and be a voice for the voiceless.

The brutal practice of late-term abortion is one thing at stake in the 2020 election. This horrific procedure involves tearing an unborn baby apart limb by limb—proven to be incredibly painful—at a late stage of development. While this is unfathomable, the Democratic Party is actively pursuing funding and easier access to this procedure, even while 79% of the population opposes it.

The Republican Party platform, on the other hand, supports an end to abortion and continues to fight against the funding of abortion. Republicans value life and desire to protect the lives of the unborn. More importantly, they support the Human Life Amendment and the overturning of Roe v. Wade.

Some people think if it doesn’t affect them directly, it’s no big deal. The truth is—there is no such thing as a law that doesn’t impact everyone in some way. Consider the latest legislation in California. SB 145 passed in both the Senate and Assembly and is with the governor, a Democrat, for signature. This bill softens criminal penalties for LGBTQ+ adults who have sex with minors.

More and more, we see the promotion of homosexuality in our public schools, the military, the workplace, the media and across all aspects of society. Accusations of hate speech and threatened jail time are aimed at Christians regularly for not agreeing.

Democrats agree with redefining marriage and forcing society to agree with this lifestyle. Republicans believe marriage is between one man and one woman, and they do not believe in promoting homosexuality.

“Moreover you shall select from all the people able men, such as fear God, men of truth, hating covetousness; and place such over them to be rulers of thousands, rulers of hundreds, rulers of fifties, and rulers of tens.” –Exodus 18:21 (NKJV)

Perhaps of greatest importance is the future selection of judges by the next president.

Why is this so critical?

Judges, especially those on the Supreme Court, have made some of the most impactful decisions in our society, including the legalization of abortion and same-sex marriage. Many upcoming social matters will be determined by those selected to sit—for life—in our courts.

As Christians, we must choose people who fear God, as the verse above states, to determine our nation’s course. Those judges are selected based on the president of the United States’ agenda and views; and statistically, the judges he appoints will follow his party’s platform and agenda more than three-quarters of the time. With the recent passing of Justice Ruth Bader Ginsburg, the selection of a replacement is even more critical.

We encourage you to pray about these points and what’s really at stake in America in the 2020 election. Study the party platforms (see a comparison HERE). We are at a crossroads, and the Christian vote will be a deciding factor in the outcome of the 2020 election. Will you be there? Will you join your faith with ours in standing for a godly direction for America? You are needed in this hour to watch, pray and VOTE!

Watch this week’s BVOV broadcasts HERE with Kenneth Copeland, Michele Bachmann and Pastor George Pearsons to learn more about how America is under fire and what’s at stake in the 2020 election.

5 Things Every Christian Should Know About the Equality Act

Things You Need to Know Before You Vote

The Power in a Single Vote

How to Pray for the 7 Mountains of Influence in America