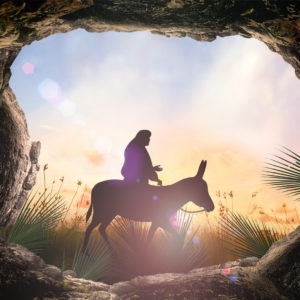 This past Sunday was Palm Sunday when the Church celebrates the triumphant entry of Jesus into Jerusalem. Unfortunately, most people have never realized that in this account God reveals His progression into Divine power. Let us study this progression starting with Matthew 21:1-11, you will discover that it is revealed in four (4) words, all starting with the letter “P.”

1 Now when they drew near Jerusalem, and came to Bethphage, at the Mount of Olives, then Jesus sent two disciples, 2 saying to them, “Go into the village opposite you, and immediately you will find a donkey tied, and a colt with her. Loose them and bring them to Me. 3 And if anyone says anything to you, you shall say, ‘The Lord has need of them,’ and immediately he will send them.”

4 All this was done that it might be fulfilled which was spoken by the prophet, saying:

5 “Tell the daughter of Zion,
‘Behold, your King is coming to you,
Lowly, and sitting on a donkey,
A colt, the foal of a donkey.’ ”

“Hosanna to the Son of David!
‘Blessed is He who comes in the name of the Lord!’
Hosanna in the highest!”

10 And when He had come into Jerusalem, all the city was moved, saying, “Who is this?”

11 So the multitudes said, “This is Jesus, the prophet from Nazareth of Galilee.”

The multitudes were swept up in jubilant Praise! Let us continue with Matthew 21:12.

12 Then Jesus went into the temple of God and drove out all those who bought and sold in the temple, and overturned the tables of the money changers and the seats of those who sold doves.

Jesus cleansed the temple. I remind you that the Temple of God today is not made by flesh and blood, it is made of flesh and blood, our bodies are the Temple of the Holy Ghost, and as such they just be cleansed or Purified. Only Jesus has the power to purify His temple, after all, in the Parable of the Vine and the Branches He taught that apart from Him we can do nothing. Ask Him to purify the temple of your life this Easter Season. Onward to verse 13.

13 And He said to them, “It is written, ‘My house shall be called a house of prayer,’ but you have made it a ‘den of thieves.’”

After the temple of our lives has been Purified it can it become a House of Prayer! Not just a religious sounding prayer, but a prayer that is filled with Divine Power! Verse 14 reveals the fruit of that prayer.

14 Then the blind and the lame came to Him in the temple, and He healed them.

Apply the first three diligently to your life and God’s Power will be released in and through you, to the Glory of God and the shame of the devil!