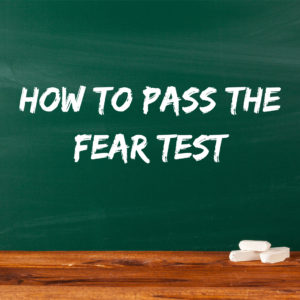 This article is by Kenneth Copeland Ministries

Pass the Fear Test! Take authority over fear, trust in God’s love and promises, keep the devil under your feet, starve fear, and feed your faith!

Even from an early age, life is full of tests—math tests, driving tests, aptitude tests and countless others we all face at one point or another. A test is designed to measure performance, gauge understanding and determine whether a person has mastered a particular skill. When it comes to our spiritual lives, we are not exempt from being tested; in fact, Satan throws out all kinds of “tests” or challenging circumstances, hoping we’ll take the bait and give him access to our lives. His all-time favorite? The Fear Test.

The Bible repeatedly commands us to not fear, which comes in the form of worry, anxiety and various phobias. It is Satan’s primary weapon, and he responds to it the way God responds to faith. He uses fear to challenge the promises of God and steal hope from Christians.

So, when the Fear Test comes to your life, do you pass or fail? If you haven’t been making the grade in this area, take this tutorial on how to pass the Fear Test. Answer these questions, and you’ll learn how to take authority over fear, trust in God’s love and promises, keep the devil under your feet, starve fear, and feed your faith!

Question 1: Are You Taking Authority Over Fear?

Have you ever heard someone tell you they have a “healthy fear” of something? Some people think fear is good. But what’s good about it? The Bible says it’s not of God, so it can’t be good. It brings torment—not peace, wisdom or freedom (1 John 4:18, NKJV).

So, the first question on the test is, where are your fears coming from and are you taking authority over them?

If you grew up in a poor family, you might be in bondage to the fear of poverty. You might even try to apply the principles of God, but the devil will keep robbing you until you go before God, repent of that fear, and get rid of it!

The same thing is true of sickness. If you’re afraid of it, you can expect to be sick. The fear will produce the sickness. But if you take authority over your fear and the sickness, which are both from the enemy, you can trust in God’s Word, which says He has already healed you (Isaiah 53:4-5, 1 Peter 2:24).

Perhaps you fear for the safety of your children, and you are constantly worried and full of anxiety. To pass the fear test, take authority over the fear by standing on Psalm 91 and the many other promises of God that promise their well-being. Put your hope and faith in God!

Ephesians 6:12, KJV, says, “We wrestle not against flesh and blood, but against principalities, against powers, against the rulers of the darkness of this world….” So, if you’ll take authority over fear and break its power, the poverty, sickness and failure that fear was designed to bring will never have the opportunity to manifest in your life!

Question 2: Are You Trusting in God’s Love?

“There is no fear in love; but perfect love casts out fear, because fear involves torment. But he who fears has not been made perfect in love.” –1 John 4:18, NKJV

This verse clearly states that “there is no fear in love.” That sounds pretty simple. If you have love, you won’t fear. But the Bible also says God is love (1 John 4:8). So, if you have God, you have love, which means you shouldn’t have fear, right?  But if you still have fear, the next question is, “Are you trusting in God’s love?”

Love is a powerful force. It causes our faith to work (Galatians 5:6, KJV), it keeps us in line with the Word of God (John 14:21), and it keeps us out of the devil’s trap of fear. When you believe and trust the love God has for you, you won’t be afraid to get your hopes up and put your faith in His Word. If you trust in His love for you, then you will believe that He wants to prosper you. You’ll believe He will heal your body. You’ll believe that He will protect your children. You will believe the Love.

That’s why seeing yourself as being loved by your heavenly Father and trusting in that love is the first step to walking in love. It allows you to love others and drive out fear in your life.

Question 3: Are You Fully Persuaded?

“And being fully persuaded that, what he had promised, he was able also to perform.” –Romans 4:21, KJV

How do you know if you are fully persuaded of something? Is it because you think, feel or wish to believe it? No. When you are fully persuaded of something, you can’t be moved from it—no matter what anyone in the world says. There could be a new study and mass media coverage telling you that the sky is orange. Your neighbor could believe it; your friends could believe it. But it wouldn’t change the fact that you know the sky is blue. All you have to do is look at it!

But what about things that you can’t see in the natural—like the promises of God before they manifest? How can you become fully persuaded that the promises will come to pass?

When you take a stand on the Word of God, Satan will immediately come and challenge those promises with every fear tactic he can come up with. He sends people who speak unbelief, circumstances that seem to be going in the opposite direction, bad reports, discouraging thoughts—you name it! But let’s not forget for one moment—he’s a liar!

So, to answer the next question to pass the Fear Test…are you fully persuaded that what God has promised you will come to pass? If so, you won’t be in fear. You won’t quit when the devil throws tacks in the road. Why? Because you’ll have hope. You’ll have the image on the inside of you that Jesus said it, so you can have it. Period.

Question 4: Are You Giving the Devil an Inch?

The entire mission of Satan is summed up in three words: steal, kill, destroy (John 10:10). That’s why he uses the fear tactic so often. He will use thoughts and circumstances to see if he can get you to give him just an inch by causing you to be in fear.

For example, sometimes, people think it’s harmless to worry. They even feel irresponsible if they don’t. But worry is the same as fear. If you give the devil even an inch by worrying, he will plant that seed of fear in you, and it will only grow when you entertain his threats of the future and his boasts about the past. Before long, you will begin to believe Satan’s lies rather than the truth of God’s Word.

When a Fear Test like this comes, there is only one answer—don’t give fear a place in your life. If past mistreatment, failure or unrealized manifestations are opening the door to fear, put them under the blood of Jesus and wash them away forever. Start by saying “I refuse to fear.” Make that declaration before the devil takes even 1 inch.  Then say, “Devil, you’re trying to put fear on me. I’m not going to accept that fear. Get out of here and don’t come back!”

Question 5: Are You Feeding Faith and Starving Fear?

“Do not be anxious about anything….” Philippians 4:6, NIV

If you’ve ever been to the zoo, you’ve likely seen a sign that says something like, “Don’t feed the crocodiles.” Why? Because when you feed them, they become dangerous. The same is true of fear. Fear is only dangerous if you feed it. When you starve it, it becomes smaller and smaller until it doesn’t even exist in your life. It works the same way with faith, too. In order to pass the Fear Test, you need to feed faith and starve fears.

So, the next question on the test is, how do you feed faith? With the Word of God (Romans 10:17). Put it in your eyes and in your ears on a continual basis. Feed your spirit daily hot meals of God’s Word, not just one cold snack per week. Let God’s Word become the final authority in every area of your life.

How else do you starve fear? Refuse to feed it. The best food for fear is secular media, news, and people who speak fear and negativity. Remove these things from your life, and go on a fear-free diet!

Next, guard what you say. If you are believing for something, don’t say anything contrary to the promises God has given you concerning it. Your objective is to keep your hopes up…not to tear them down and cripple your faith with negative, fear-filled words. Instead, speak God’s promises in faith.

So, how’d you do? Do you think you have what it takes to pass the Fear Test the next time the devil tries to steal your hope and challenge God’s promises for your life? When you study and implement these strategies, you’ll earn an A+ in resisting fear. You’ll pass the course with flying colors, and be on to bigger and better things—like living life abundantly. Make up your mind to put your hope in God, and become a person who refuses to let fear rob you of the promises of Almighty God!