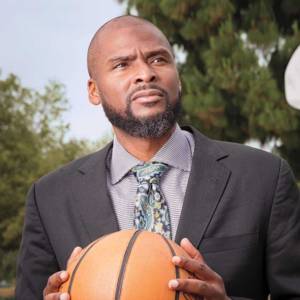 I was standing in the men’s room at an upscale Seattle, Washington, steakhouse. I’d spent the day hanging with my Boston Celtics teammate Avery Bradley, volunteering for one of his favorite local charities. We’d helped feed 500 families. Now we were unwinding with some of the other sponsors. NBA training camp was right around the corner. I’d just signed a $1.4 million contract. Life was good.

Just as I was finishing up, I felt something. A hand gripped my backside. Not in an accidental kind of way. What on earth? I zipped up my pants and whirled around. An older dude, stumbling drunk, a few feet away from me, smirking. I didn’t think. My fingers shot out, inches from his face. “I could kill you with my bare hands,” I said, but he just laughed. “What is it you see in me that you would do that?” I demanded, the thought escaping my lips almost before it registered in my mind.

He tried to make a joke. I shoved past him. “I’ve got to get some air,” I said when I got back to the table.

I went outside. There was the older dude, still grinning, still stumbling drunk. Before I knew what I was doing, my hands were around his throat. Squeezing hard. Then arms pulled me away. Avery and the guys we were eating with. “It’s okay. He’s not worth it. Let it go,” they said.

Back in my hotel room, the walls felt as if they were closing in on me. I was frightened, confused. I curled my six-foot-three frame into a ball and called my wife, Tosha.

“Let’s pray,” she said. “Heavenly Father, hold Keyon in your arms. Protect him. Comfort him.” I winced at those words. I’d never been sure that God really did protect me, not after what had happened to me when I was a kid. A secret I’d kept buried inside me for 25 years. I’d never talked about it with Tosha or anyone else.

I told Tosha not to worry, but after I hung up I couldn’t sleep. That awful summer day. It was all coming back. I was seven years old, walking with my best friend to the school basketball court where I grew up in Ft. Lauderdale, Florida.

It seemed as if I’d always had a basketball in my hand. Still in grade school, I started playing against teenagers. Point guard, running the offense, the spark that makes everything happen. I loved the speed, the constant motion, how the other kids looked up to me.

But this day, it was raining hard. Just past an apartment building, an older teenager I knew shouted from a window, “Come hang here until the rain passes.”

All the adults were at work. We listened to hip-hop, rapping along. “Check this out,” the older boy said. He put on a video. Suddenly, onscreen, a man and woman were having sex. I knew it was wrong, but I couldn’t turn away. The older boy ordered my friend and me to touch his privates. Then more. I thought it would never end. When he finally released me, I ran, not even looking for my friend. At home, I got right in the shower, wanting somehow to wash away the shame, the guilt. I couldn’t stop crying. God, I knew, had seen everything. There was no hiding from him. I couldn’t imagine what he must think of me. Why hadn’t I fought back? Had I done something to make the boy think I was interested? I felt sick.

I didn’t dare tell anyone. I was afraid of what my parents and siblings would think of me. Afraid of what they might do to the older boy if I told them. The only way to get through it was to toughen up. Keep my mouth shut. Show the world I was no pushover.

My father was a florist. He kept tons of knives around the house to do his work. I found a thin one, pulled the rubber grip off my bike’s handlebar and slid it inside. If there was a next time, I’d be ready. I was a warrior. The face I wanted the world to see carried over to my game. On the court, I was a slashing, juking, ball-handling wizard. Playing point guard, I was in control—everything went through me. My brothers, my sister and my parents were my number-one supporters. “If you can see it, you can achieve it,” my father would tell me. “That’s the secret. You’ll be unstoppable.”

I liked the sound of that. Unstoppable. I tried never to think about that horrible day. I had to put all that behind me. Keep moving. The same way I got past opponents on the court. Yet anxiety and insecurity would bubble up out of nowhere.

After playing two years of college ball at the University of Missouri, I got picked in the first round of the 2000 NBA draft, the tenth player selected. Since then, I’d been in the league 12 years and my game was only getting better. The Celtics were one of the top teams in the league. The previous season, we’d taken Miami to the seventh game of the Eastern Conference finals. I’d just signed the biggest contract of my life. Coach Doc Rivers had singled me out as one of the team’s leaders. “Keyon gets it done,” he said.

I had a beautiful, devoted wife. Four kids. A perfect life. Why was I letting one encounter shake me up like this? I was sobbing. Like that day in the shower when I was seven. My mind felt like it was coming apart.

I tried another prayer, but the words wouldn’t come. I didn’t deserve God’s love. I could feel him staring down at me, judging me. The shame of that day. It had never left me. I’d felt it at times when I got down, discouraged. The feelings intense, a dark shadow I couldn’t control. It would come over me after a bad game. I’d kick myself for missed shots, errant passes, feeling as if I’d let my teammates down. I’d tried to hold it all together. But it wasn’t easy. Part of me was afraid to let anyone get too close, even Tosha. They’d learn the awful truth about me. Now, as if a dam had burst inside, I couldn’t hold it back.

Getting to the airport the next morning to go back to Boston was harrowing. Being home was no help. I didn’t want to tell Tosha about being molested. Didn’t want to look weak. But something had to give. I didn’t even know what I was saying.

“You’re talking crazy,” Tosha said. “What do you mean we need to repent? I’m worried about you, baby. We need to see someone.”

“No, I can’t,” I said. The thought of spilling my guts to a shrink scared me more than anything. Who knew where that would lead? I wasn’t sleeping. Tosha, our kids looked at me as if they were afraid of me. I couldn’t go on like this. I drove to the Garden, where the Celtics play, wandered onto the court and broke up an informal practice. “The end is near,” I heard myself say, thoughts, phrases ricocheting through my mind. I went to General Manager Danny Ainge’s office. “I’m done,” I said. “I can’t do this anymore.” He listened, then picked up the phone. A couple teammates appeared at the door. “These guys will drive you home,” the GM said. “Let us get you some help. You don’t seem like you’re in a good place.”

That’s for sure. A day later, I walked down the middle of a busy road, cars honking. Suddenly there were police all around. Tosha screaming.

Next thing I knew, I was in a small windowless room, the walls padded. No furniture except for a bed. I couldn’t understand what the doctors were asking me, and I didn’t trust them anyway. “I want out of here,” I demanded. They gave me meds that made me like a zombie. But slowly my mind began to clear.

That night in Seattle. How had I let a drunk man get to me like that? It was nothing. And yet it was as if, with that one grope, he’d opened some kind of portal inside me. That door I’d always kept closed was flung open. All those feelings of shame I’d kept bottled up. It was too much. It was a secret that nearly killed me.

Somehow I’d made it through all those years of repression. Not because of anything I’d done. Because of God. He’d been with me—even when I felt abandoned. He’d never left my side. It was I, in my shame, who had left him. Now for the first time I could actually feel him. An overpowering, physical presence. Holding me, comforting me. The shame, the fear I’d held inside of me, was gone.

The next day, Tosha came and climbed into bed beside me. “There’s something I need to tell you,” I said.

When I was done, Tosha held me tight. “I love you, baby,” she said. “And God loves you. He loves you even more because of what you’ve been through.”

A few days later, I moved to a better room—one with windows. Coach Rivers arrived. He’d flown from his summer house in Florida the moment he’d gotten word.

I told him everything. If Coach was shocked, he never showed it. “I’ve known so many men with a story like this,” he said. “It’s nothing to be ashamed about. I’m here for you. Whatever you need.”

True to his word, Coach got me out of the hospital and hooked me up with an amazing psychiatrist, Timothy Benson at Harvard Medical School. Through months of therapy, Dr. Benson helped me see how a repressed trauma can cause a severe mental breakdown years later, triggered by an event that brings it all back. “It’s called PTSD,” he told me. “It doesn’t affect only soldiers. Talking through what happened, understanding the emotions involved, being open with friends and family are all part of the healing.”

Dr. Benson was right. Talking about the childhood sexual abuse I experienced, the fear buried inside me, has helped me heal. That’s why I’m sharing my story here. If you are suffering as I did, talk to someone—a therapist, a doctor, a person you trust. And talk to God. He sees your soul’s pain and, as my wife put it, loves you even more because of what you’ve been through.