Go to the Good Father 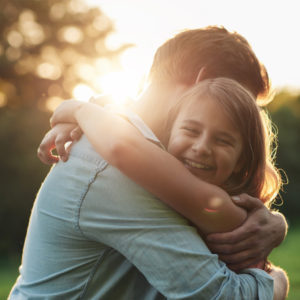 Many of us were raised by loving fathers who did their best to make sure we had everything we needed, but no one’s father was ever perfect. Every father makes mistakes and lets us down. Some fathers mean well, but they aren’t affectionate. Perhaps your father never told you that he loved you and was proud of you. He made sure you stayed on the right course, but he didn’t express his love. His father probably did the same thing to him. Perhaps he never heard “I love you.” He never saw it modeled. You can’t give away what you don’t have.

A friend of mine in high school had a father who struggled with alcohol. He was a good man until he would start drinking. Then he became abusive and violent. More than once my friend had to protect his mother from his father’s rage. He said to me, “Why can’t my dad just be normal. Why do I have to deal with this?” He couldn’t understand it and was becoming angry and bitter. Most fathers never planned on messing up their children by passing down their dysfunction and insecurities, but their decisions affect their families. You can’t change how you were negatively impacted by the people who raised you. But the good news is that your heavenly Father has taken all this into account. He knew who your parents would be, what you wouldn’t get, and what would be unfair. He’s already designed a plan with that in mind to get you to your destiny.

You may have been raised in a dysfunctional environment, with addictions, abuse, and neglect, but that doesn’t have to stop you. Where you come from is not who you are. You are a child of the Most High God. The Scripture says, “It is your Father’s good pleasure to give you the kingdom” (Luke 12:32). If you’ll turn to the Good Father and get your approval, your validation, your love from Him, then despite what your earthly father did or didn’t do, despite what hasn’t been fair, the Good Father will make it up to you and pay you back for the injustices. The Good Father takes pleasure in not only helping you overcome, but He’ll show you favor that thrusts you years ahead. He’ll always be there for you. He has you in the palms of His hands. The Good Father is saying, “I’m proud of you. You’re My child. You’re My prized possession. You’re fearfully and wonderfully made. You’re a masterpiece.”

Our heavenly Father has amazing things in your future. Start going to the Good Father.