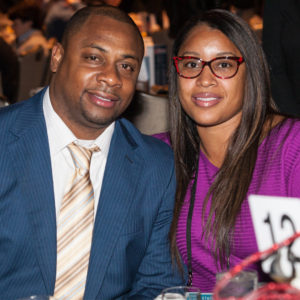 Former NFL player Troy Vincent, who grew up in a violent home, now devotes himself to confronting this all-too-prevalent issue.

by Troy Vincent, Sr. From Guidepost Magazine Posted on Sep 25, 2020

The sound is seared into my memory. Heavy footsteps. Pounding. Screaming. A storm of violence on the other side of my bedroom wall. More heavy footsteps and a slammed door. Eerie silence.

I was just seven years old when my mom’s boyfriend, the father of my younger brother, terrorized our family. He was a jealous, controlling man with a volcanic temper. If another man as much as looked at Mom on the street, she was in for a beating.

My brother and I cowered, terrified. When the storm had passed, I crept through the apartment, eventually finding my mom sprawled unconscious and bloody. I ran into the hall and knocked on neighbors’ doors. No one dared answer. I had to go to the bar next door to call 911 on a pay phone.

I grew up to become a star defensive player and a high-ranking executive for the National Football League. During my 15 seasons in the NFL, I played 207 games, intercepted 47 passes and racked up nearly 900 tackles. Yet nothing in my career as a hard-hitting defensive back compares to the violence experienced by my family growing up.

Which is why my life on and off the field has been devoted to combating domestic abuse and promoting the dignity of women and the responsibility of men to end this scourge. How does someone who makes his living in an inherently violent sport fight violence in the home?

The answer to that question encompasses a lifetime, but it can be boiled down to one word: faith. It was God who steered me away from a path followed by many kids who experience domestic violence—becoming an abuser myself.

It was God who enabled football to become a transformative force in my life. And it was God who led me to Tommi, my wife of 26 years and the mother of our five children. Tommi also experienced abuse growing up, and she taught me how to be a tender husband and father.

Together we have made campaigning against domestic violence a family mission. Never doubt God’s power to turn tragedy into hope, love and healing.

My mom, Alma, was a good person with an inner reservoir of strength. But she was young when I was born, just 19 years old. She fell prey to domineering men who used violence to compensate for their own insecurities.

Too young to defend her, I did my best to support her. My brother and I nursed her back to health whenever she returned from the hospital, bandaged and in a cast.

Why didn’t she just leave? It’s the age-old question. The answer is complex, but it’s important to remember that many women see no way out.

Some women depend on their abuser financially. Others have been emotionally warped into believing that the violence is their fault. They trust the abuser’s seemingly sincere apology and hope against hope that there won’t be another beating. They fear that if they leave, the abuser will track them down and kill them.

Eventually, Mom’s abusive boyfriend moved on and she found a better path. Being raised with the help of Mom’s parents, Jefferson and Julia Vincent, was a blessing. Grandpa, a World War II veteran, and Grandma were devoted members of Shiloh Baptist Church in Trenton, New Jersey.

I was raised in that church. The decisive moment in my life is not an interception in a championship game or being a first-round NFL draft pick or making the Pro Bowl. One Sunday morning when I was 16 years old, the pastor preached a sermon about Jesus sacrificing himself on our behalf. “God has a plan for your life,” the pastor said.

It was as if he spoke those words directly to me. Studies show that children who witness domestic violence are three times more likely than their peers to commit violent acts themselves. Even though I didn’t know the statistics back then, I knew I didn’t want the violence and fear I’d experienced to become my future.

In the sermon, I heard a promise. If I gave myself to God, God would show me a way out.

I want that, I thought. I don’t have to be what I’m surrounded by. I want a different life.

God instantly put another thought into my head: “Honor your mother. Take up her cause.” I vowed to become a lifelong advocate for victims of domestic violence.

God made good on his promise. I excelled on the football field in high school and was recruited by the University of Wisconsin at Madison.

I honored my own promise by visiting safe houses for abused women while in college and took on additional study under professors specializing in issues surrounding domestic abuse. It was all preparation for using my platform as a football player to become a spokesperson on ending domestic violence.

A few years after becoming a cornerback for the Miami Dolphins, I asked my mom if I could speak publicly about the abuse she endured.

I’m not sure what meant more to me, her blessing on my activism or her pride in the man I was becoming.

I was newly married by then. Tommi and I had met while we were in high school. My best friend was dating her sister. “Who is that young lady who’s always with your girlfriend?” I asked. We started dating while she was in college and I was going into my rookie year with the Dolphins. Tommi and I married two years later.

I thought I understood domestic violence until Tommi told me her own story of being abused by boys she had dated in high school. I realized then there was much more I had to learn.

Now I was the man putting a woman in a position of potential vulnerability. Everything I did—talking, holding Tommi’s hand, hugging her—was an opportunity to demonstrate love, tenderness and support. Or the opposite.

My responsibility extended beyond that. At first, I tried to stay out of it when players talked disrespectfully about women in the locker room. As I gained confidence on the field, I spoke up.

One day, a teammate was joking about women while holding a dirty magazine for everyone to look at. I waited until he was done, then took him aside.

“I’ve heard you say you want to find a nice young lady and raise a daughter and have a good family,” I told him. “Would you want your daughter to hear you talking like that? You’re a leader on this team, but what you’re doing right now is not leading.”

He was mad at first. But he never repeated that behavior. Years later, we appeared onstage together at a benefit. He told that story and said that moment changed his attitude.

I retired from playing after the 2006 season and moved into NFL leadership. As executive vice president for football operations, I oversee all aspects of the game-day experience: referees, stadiums, coaches, rules. I also coordinate outreach to high schools and colleges.

My advocacy continues to be an integral part of my life. Tommi and I started a nonprofit called Love Thy Neighbor, which supports after-school programs, college tours and other character-building activities for students in underserved neighborhoods.

At the NFL, I’ve helped develop training programs to prevent workplace harassment and abuse at home. Players, coaches and other league employees have been taught how to respond if they witness harassment or abuse. I travel the country speaking to men’s groups, colleges and youth.

After Baltimore Ravens running back Ray Rice was indicted in 2014 for punching his fiancée in a casino elevator, I gave an emotional address to a United States Senate hearing on domestic violence in professional sports. I helped rewrite the league’s personal conduct policy and offered to help Rice steer his life back on course after he was suspended from the NFL.

I believe in justice. I also believe in forgiveness. Domestic violence can be prevented only if perpetrators are given the support and education they need to overcome their inner demons.

A few years ago, my principles were put to a severe test when our oldest children, Desiré and Troy Jr., told Tommi and me a terrible secret. They had been sexually abused by an extended family member when they were little. They had been too frightened and confused to say anything.

I was devastated. I confronted the family member and notified law enforcement. The incident had happened too long ago to press charges.

The greater challenge was supporting my children after realizing I had failed to protect them. I held them. I told them I loved them and believed them. I made sure they got counseling.

Thanks be to God, Desiré and Troy Jr. had a strong enough foundation growing up that they were able to weather this crisis. They are both thriving now. Troy Jr. and his wife have three beautiful children, and he is launching a career in homeland security management. Desiré works as a communications strategist in Detroit, and she and her husband have a daughter. All of my kids volunteer.

Tommi and I are now grandparents. I may look like a former football player, but in reality I am Pop Pop. There is a new generation in my family. New parents. New children. New opportunities and responsibilities.

God has blessed me with this family. He has blessed me by opening my eyes to my responsibilities as a man, a football player, a husband, a father and now a grandfather. Domestic abuse is multigenerational. But so are love and tenderness and family members learning to take care of one another.

I let God into my heart, and he interrupted that multigenerational spiral. He replaced it with a life of love and public witness. That’s a victory I celebrate every day. A victory far greater than anything achieved on the gridiron. A victory that I pray will inspire you and strengthen your faith to meet the challenges you face in your life.