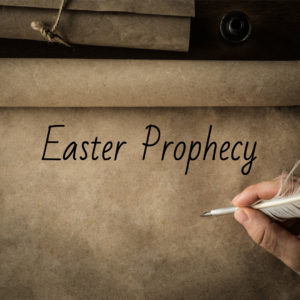 God gave me this prophecy ten (10) years ago for His people. When He told me to proclaim it again this year as we approach Easter I said,”Lord, I am not comfortable giving a ‘recycled’ prophecy.’” He immediately reminded me that His Word is eternal, and this prophecy is just as applicable today as it was 10 years ago.

Approaching Easter of 2010, I was concerned for God’s people. Many had lost their jobs because of the recession; others were barely hanging on economically. Scores felt the country was going down in a destructive spire. (A 2020 question, “Sound familiar?”)

I prayed, “Lord, Your people are hurting. They are discouraged, and losing hope. We need a Word of encouragement this Easter. He gave me the following:

It is good that you celebrate the resurrection of My beloved Son, but at the same time you need to celebrate your resurrection as well. For the same Spirit that raised Christ Jesus from the dead has quickened your mortal bodies. (Romans 8:11)

You who were dead in your trespasses and sin I have made alive together with Christ and raised you up together with Him, and made you to sit together with Him in heavenly places, far above all principality, power, might and dominion, and every name that is named, not only in this world, but also in that which is to come. (Taken from Ephesians 2: 5-6 1:23) This is a position of absolute authority.

Never forget that I have made you kings and priest unto your God. (Revelation 1:6)

Don’t view yourself as a helpless victim of brutal circumstances.

Don’t view yourself as a powerless pawn in the hands of a corrupt government.

View yourself as more than a conqueror through Christ who loves you! (Romans 8:37)

Because you believe Jesus is the Christ you are born of God. (I John 5:1)  I have delivered you from the power of darkness and translated into the Kingdom of the Son of His love. (Colossians 1:13)

Who is he who overcomes the world, but he who believes that Jesus is the Son of God. (I John 5:4-5)

The impact of this Word has been, to say the least, startling. Before leaving for Church Easter Sunday morning I sent it out to my group e-mail. As I shared it during our Easter service, people stood and applauded God. Following the service, a brother told me he had already received this Word. We had a mutual friend in NYC who put it out on his face book account as soon as he received it.

A pastor friend of mine said he used it to complete his Easter Sunday Sermon. It was like an electric shock went through his congregation.

I am reminded of a song my Dad use to sing when I was young. “Accentuate the positive, eliminate the negative, latch onto the affirmative, and don’t mess around with Mr. In-Between!”

God put it this way in Colossians 3:2. “Set your mind on things above, not on things on the earth.”

Beloved, we cannot live the way God has called us to live until we believe we are what God says we are!